Single serving coffee brewers are no longer the newest craze, but they have established themselves as a great staple for the household.  But anyone who has owned a single serving brewer can attest to the frustration involved when having people over and needing to brew multiple cups at once.

Nothing brews multiple cups quite like an old-fashioned drip brewer.  The Hamilton Beach Flexbrew attempts to bring the two of these very different products together into one kitchen utensil.  With a clever engineering feat, Hamilton Beach attaches the two of them at the hip. 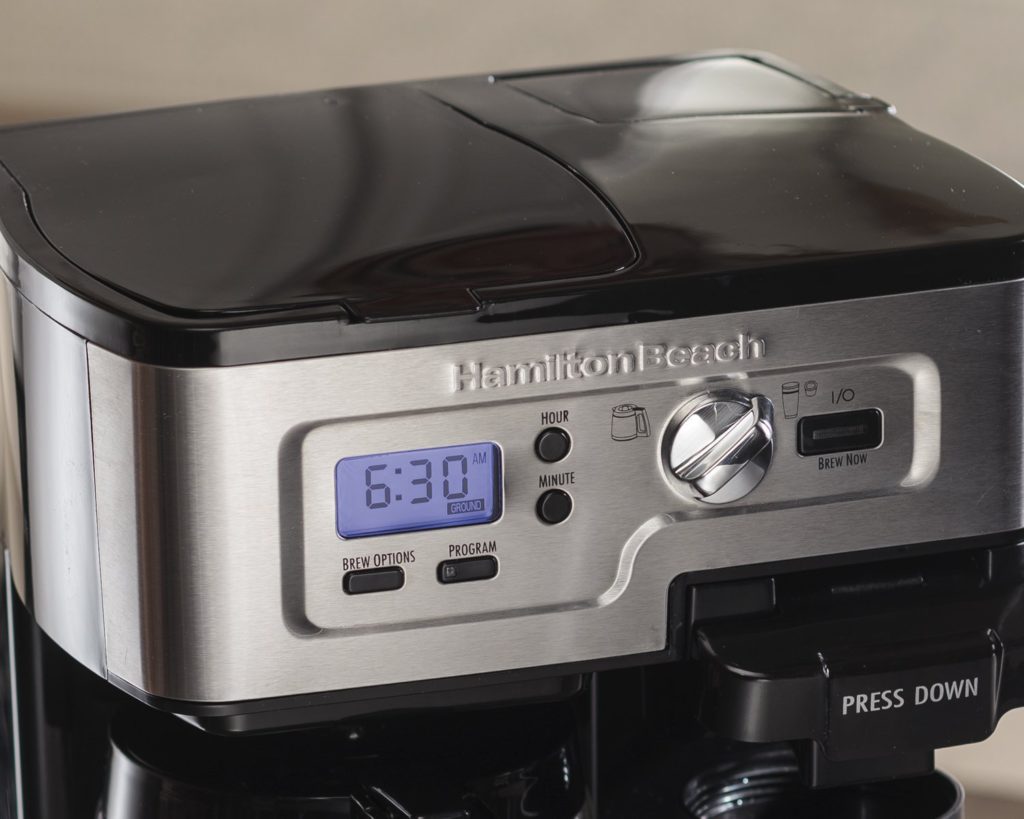 If you are looking for a single brewed cup of joe, the Hamilton Beach Flexbrew offers a K-Cup compatible option.  If you aren’t into the K-Cup trend, you can use ground coffee to brew your single cup as well.

The single serve side brews up to 14 ounces for a travel mug or home cup.  The cup rest raises and lowers, allowing you to use almost any size cup without worry of splashing over. The single cup brewing method supposedly makes a fresher, better extracted cup of coffee.

Party Hard with a 12 Cup Carafe

The Hamilton Beach Flexbrew also has a 12 cup carafe, more traditional, brewing system.  This side of the machine acts like most simple coffee brewers.  You add the coffee ground to the top compartment, overtop a filter, add the desired amount of water, and press start. You can program the carafe side to start brewing at a programmable time, and automatically turns the hot plate off after two hours.

How is the Design?

The overall look of the Hamilton Beach Flexbrew is clean and sharp. The standard chrome on black look suits the machine, and the lines look nice.  The backlit display is well placed, and the carafe is a smooth sided cylinder instead of the traditional wide based carafe.

The switch to choose between carafe and single brew is obviously placed, as is the K-Cup loading area.  That is a nice perk, because I have seen some K-Cup brewers that were not so user friendly.  Any off brand of K-Cup that works with a Keurig machine should also work with this brewer, nice!

The concept behind the Flexbrew is great. Two in one products like this are rarely as helpful as the Flexbrew is.  The 12 cup drip coffee brewing method is easy to use.  It is just like any other drip coffee brewer.  The water loading area is easy to reach, and there isn’t much risk in missing while pouring water in.  The drip brewer takes basic filters, and has a “bold” or “strong” option to make the coffee a bit stronger than usual.  The programmable start is also simple to use.

Using the single cup brew side is also simple enough.  The K-Cup compatible area is easy to find and open.  The start button is also simple.

One thing I don’t enjoy is the stand that is used to keep a smaller cup close to the brewing mechanism. It is flimsy and easily knocked over. If you don’t use the stand though, you are bound to have coffee splash all over your counter.   It also doesn’t fit a very large travel mug, even without the stand in place whatsoever.

The K-Cup and drip coffee brewer both have a beep alert to let you know that they are done brewing. Of course, you have to wait a few more seconds to allow whatever water is still soaked into the grounds to leak out, but the alert is a nice addition.  It allows me to continue my morning routine and return to the single cup of coffee after the beep sounds.

Having the convenience of choosing between a single cup of coffee and a pot is a nice.  I don’t usually need to brew more than one cup, but if I have guests or if I feel like having multiple cups (maybe I know I will be hanging out for a while) I like having the option to brew more all at once.  The Simplicity of the design is nice.  It doesn’t have more buttons than are necessary, and the buttons are easily found.

The K-Cup loading area is also easy to find, and the start button is plainly placed.  The drip coffee is a great drip coffee brewer, and doesn’t try to change up a traditionally good system.  Both sides brew great coffee, with as much flavor as any other brand of brewer I have used. The automatic brewing setting is nice if you want to have coffee ready for you in the morning.  Like I said, I don’t usually use the drip coffee brewer, but it is a nice addition, and I can see its use.

The hot plate’s inability to be turned off manually is unfortunate. Since I don’t use the drip coffee brewer as often, I would gladly keep it turned off 99% of the time. But instead I have to be wary of it while I get my coffee together. Not that it is an enormous hassle, but it just seems like a simple design flaw that could have been avoided.

The size of the single cup area is also a downside to the Flexbrew.  I wish it would have a better mechanism than a flimsy stand.  At the same time I wish it had a larger space for a larger travel mug. 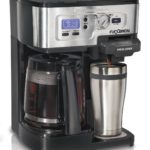