It seems that at least once a year, I learn of a new way to enjoy coffee. Pour-overs, cortados, chemex, and the list just goes on.

A few years ago, I took the plunge and bought a French Press without doing any research. I didn’t know anything about the different models on the market. All I knew was that, of every brewing method I had personally tried, French Pressed coffee was my favorite. In comes the 34 ounce 18/10 Stainless Steel French Press by Secura and suddenly I’m only a bag of coffee beans away from my favorite cup of coffee.

While my purchase may have been a little impulsive, not having researched specs of other presses, I do not regret my decision. Now that this has been my personal French Press for a while, here is what I, a more informed Secura owner, have to say.

First, let’s start with what a French Press is for and why you’d choose this brewing method over others.

Advantages of a French Press

Two huge advantages to a French Press over other brewing methods are speed and flavor – doesn’t get much better than that. Forget going to the coffee shop (don’t actually, baristas are people too), all you need is a French Press, some hot water, and course ground coffee.

Let the coffee grounds steep in the hot water and in about 4 minutes you’ll have yourself a great cup of coffee. Quick isn’t the best part though. The course grounds being fully submerged in water extracts more flavor from the coffee beans, unlike brewing methods with paper filters where you lose a bit of flavor.

This 34-ounce model of the Secura 18/10 stainless steel French Press is one of two that Secura markets. 34 ounces seems like a pretty attractive number. That would be close to three cups of coffee, if drinking from a 12-ounce mug, which is perfect for sharing or taking your time to finish the press. However, 34 ounces is referring directly to the French Press container.

The basin of this French Press may hold 34 ounces of liquid, but it will not make 34 ounces of coffee. Some of that space goes to the ground coffee beans, as well as to the plunger. All things considered, you wouldn’t want to fill the basin up to the brim anyway, because the press would displace the water and cause overflow.

After all is said and done, you’re looking at actually having between 24 and 26 ounces of coffee. I’ll explain how I got that number a bit later. 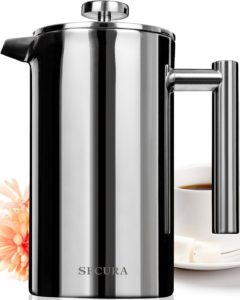 This model has a 34-ounce container made of 18/10 stainless steel. 18/10 is a grade of stainless steel− the top grade in dining and food prep− and refers to percentages of certain metals that are present in the steel alloy. 18/10 measures at the top in rust resistance, corrosion resistance, and temperature resistance, meaning that this press is built for longevity.

The screen is also made of 18/10 stainless steel, and along with the screen included in the press, Secura is adding a bonus screen through Amazon.

If nothing else, this French Press is pretty. It’s definitely something you can feel good about leaving on your counter to catch some eyes. In addition to the attractiveness of the sleek-looking stainless steel, the press is high quality, and will last you a long time.

The design of this Secura is ergonomic. It features a large, comfortable handle meant to compensate for the weight of a full container. The screen unscrews and disassembles for easy removal of all the coffee grounds.

This is what separates this press from others on the market. It’s not something you’re going to consider until it’s too late, but the flaw in many French Presses is a short spout. Short spout means messy pour and that means cleaning up. The long spout on this Secura makes for a smooth pour and leaves no worry of getting coffee anywhere but your mug: No spills, no dripping, puddles, no water spots.

Pressing down the plunger after steeping is a bit of a chore. The top of the French Press doesn’t form a complete seal with the container, which means that, from start to finish, you’re losing temperature, even during the steeping period (not a lot of heat is lost, just some).

Despite the sound reasoning for the stainless steel construction, my biggest gripe with this French Press is that I can’t see inside. Not only does it leave a bit of guesswork in determining how much coffee is left, but after seeing the coffee grounds dominate the container for a few minutes, the plunging process leaves me with an odd feeling of satisfaction—a sensation I miss out on, due to the opacity of the container. But maybe that’s just me.

The model descriptions for most French Presses are going to include the fluid ounce capacity of the container− not how much coffee the press will actually make. Admittedly, 34 ounces of coffee sounds great, and no manufacturer is going to tell you their press makes almost a full 10 ounces less of coffee, as I mentioned in “before you buy.”

This is a French Press I use about once a week, and normally, I get about 2 cups of coffee in a regular 12-ounce mug. For the sake of this review, I decided to simulate what would be a slower-paced morning for me. In addition, instead of using a more typical 12-16 ounce mug, I used an 8-ounce mug.

Doing this, I got a little more than 3 solid cups of coffee out of this press, and finished over the course of an hour. I finished my first cup rather quickly and sipped the other two. My second cup was still hot, bordering on warm, and by my third cup, the temperature of my coffee was lukewarm, at best.

An important thing I noticed is that I never caught a stray coffee ground; there was nothing but coffee in my cup.

Because the press is consistently losing temperature, it’s probably best suited to sharing a full container between two people. For any more than two people wanting to partake, there is a 50-ounce model of the Secura 18/10 Stainless Steel French Press. That being said, the 34-ounce model is the smallest that Secura makes, and it may be just a bit too much coffee for the one-cup drinkers.

The quality of what it’s made of ensures that, as long as you’re happy with your product, you won’t have to buy a new French Press due to rust or any corrosion. If you hate washing dishes, like I do, you’ll also be happy to know that each part of this French Press is dishwasher safe, including the disassembling screen. 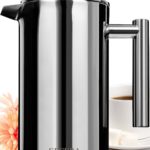 About the Author: Bean Head